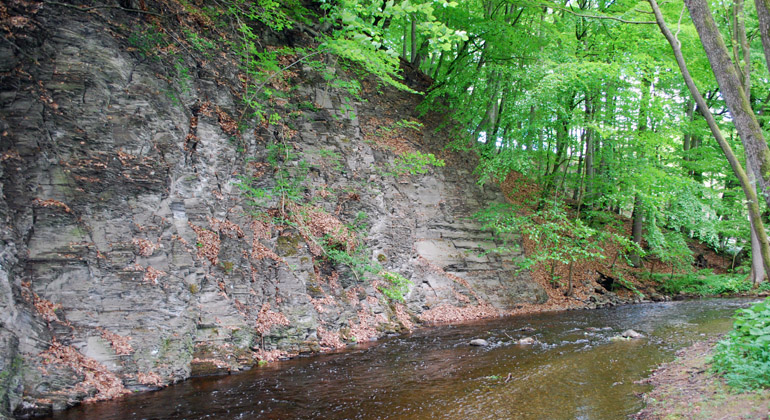 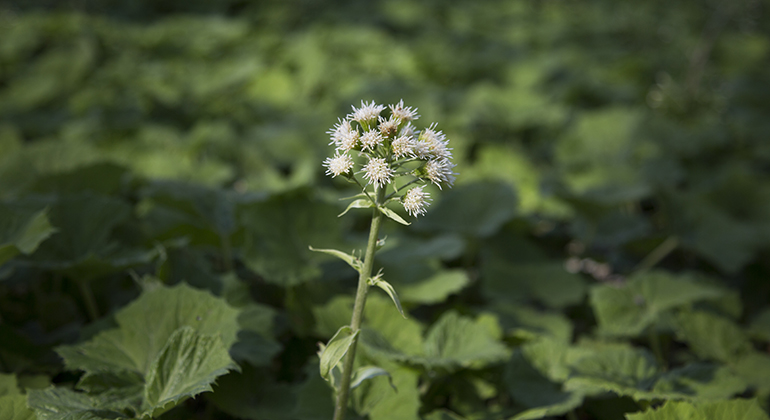 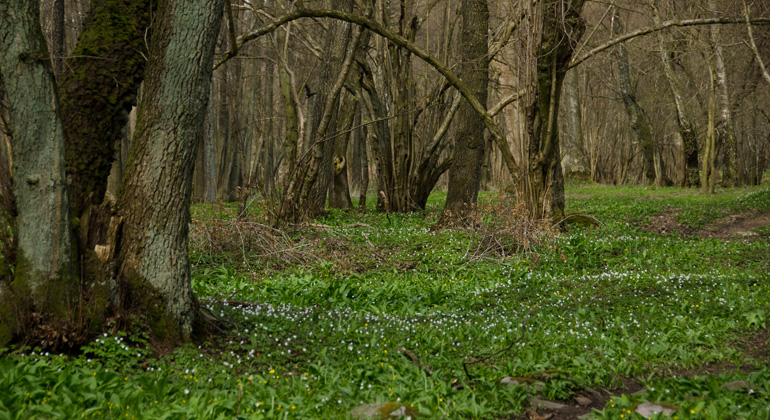 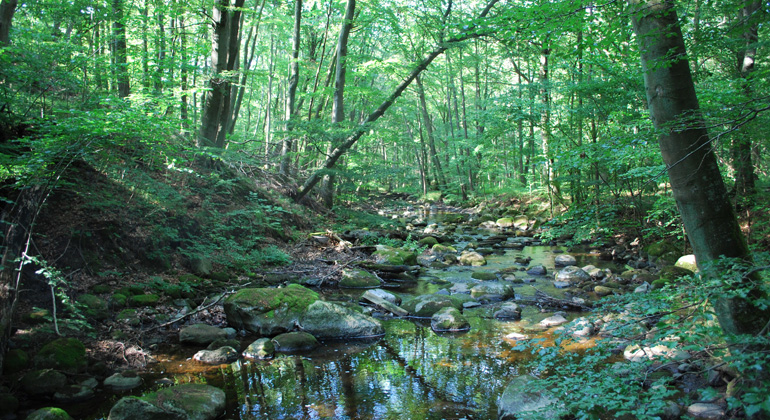 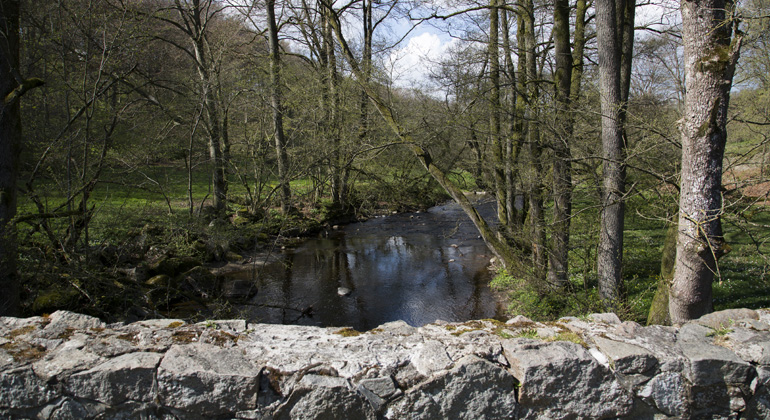 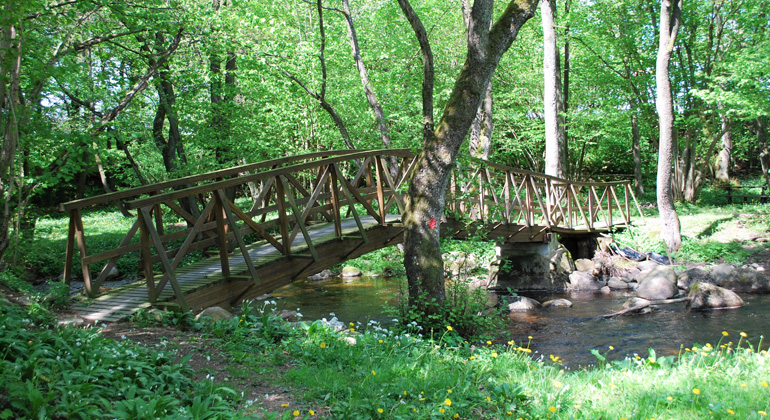 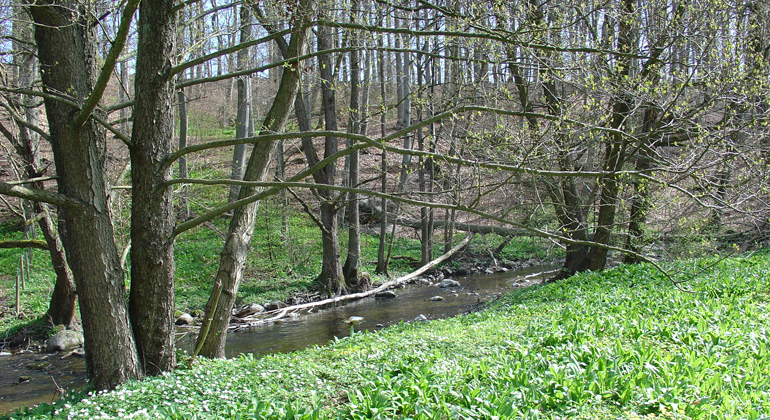 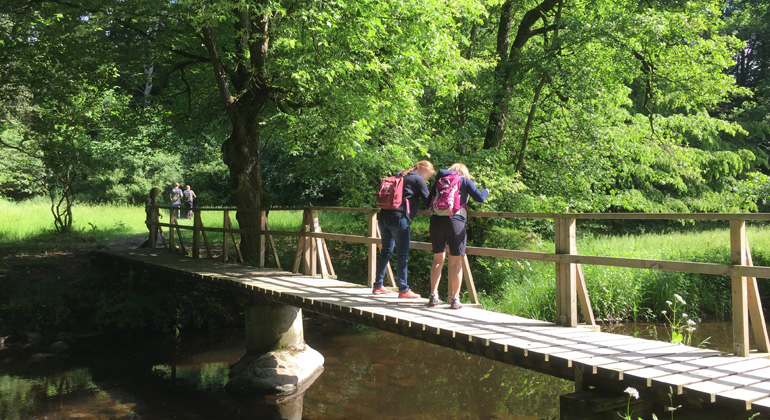 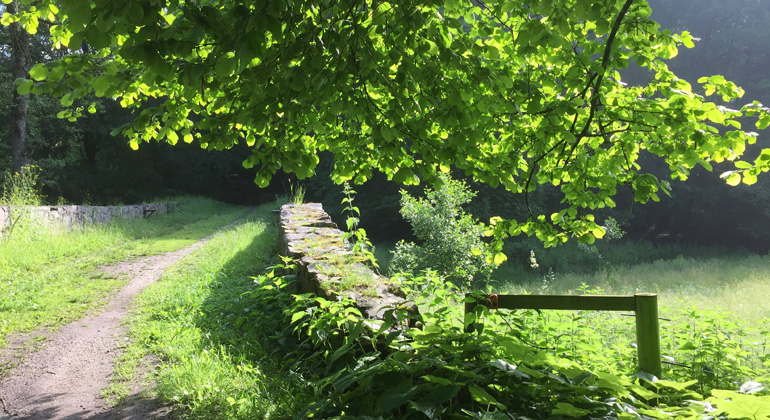 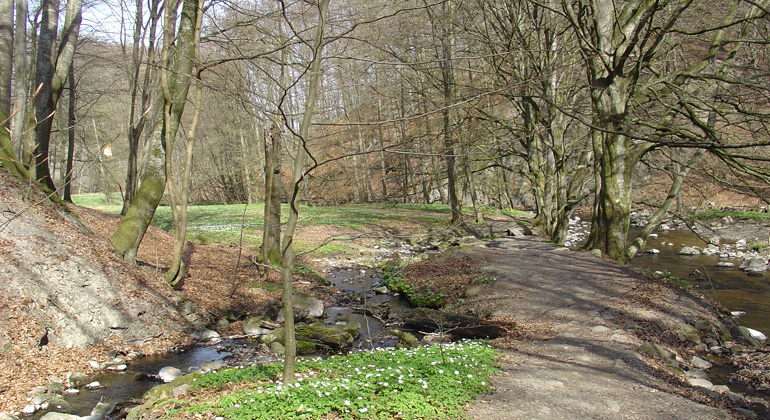 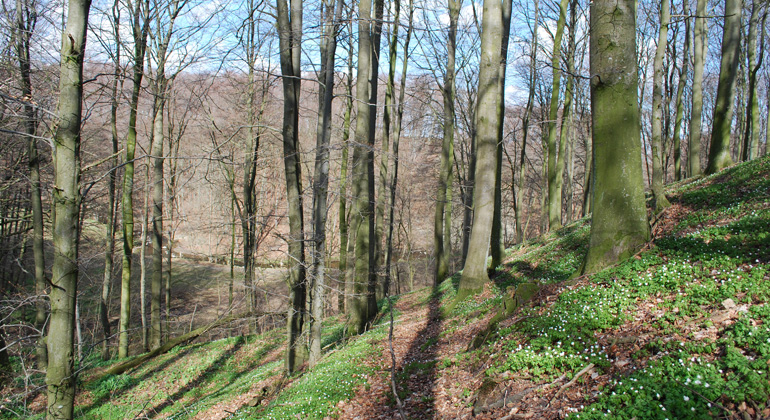 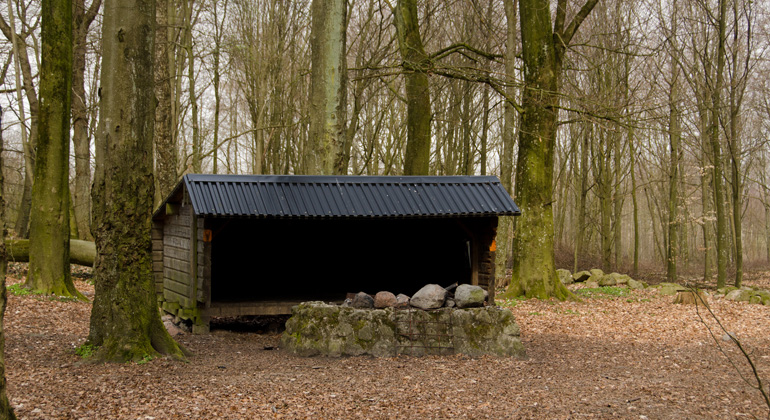 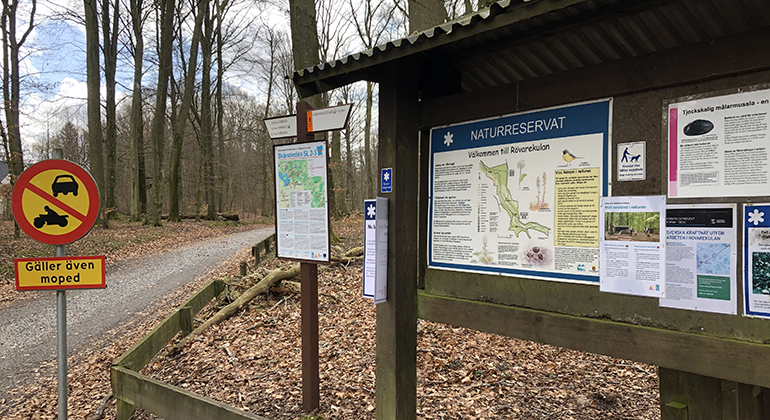 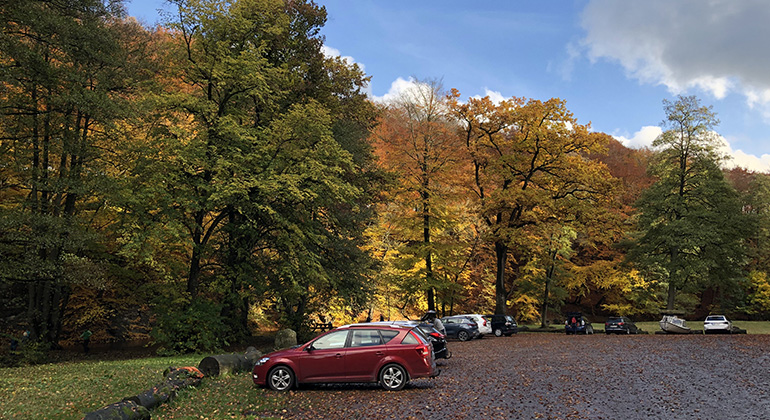 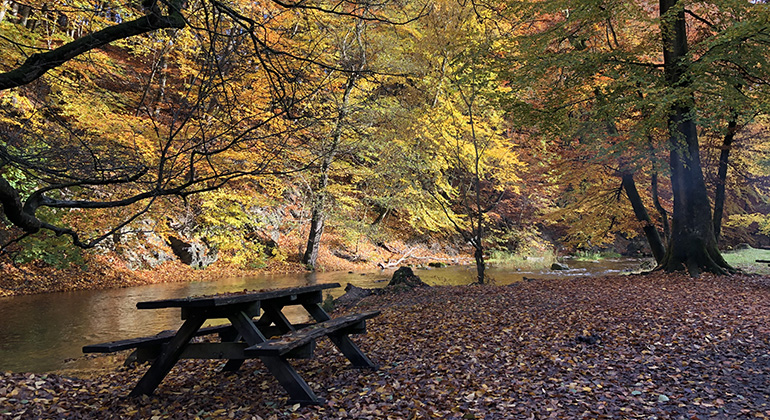 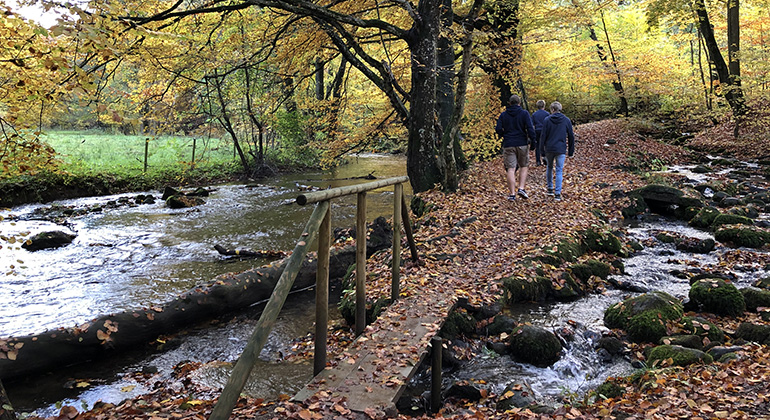 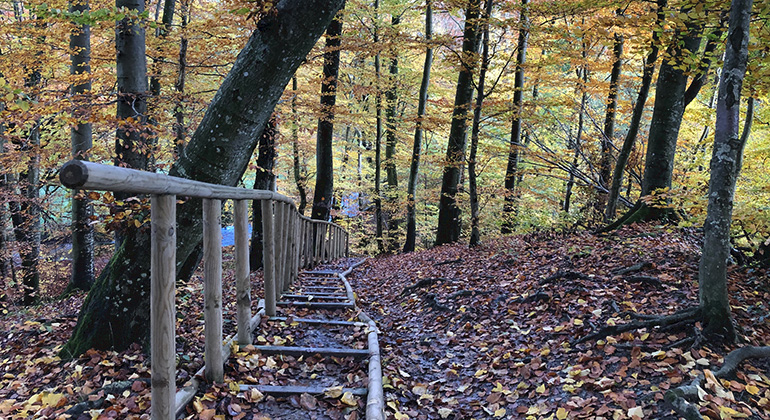 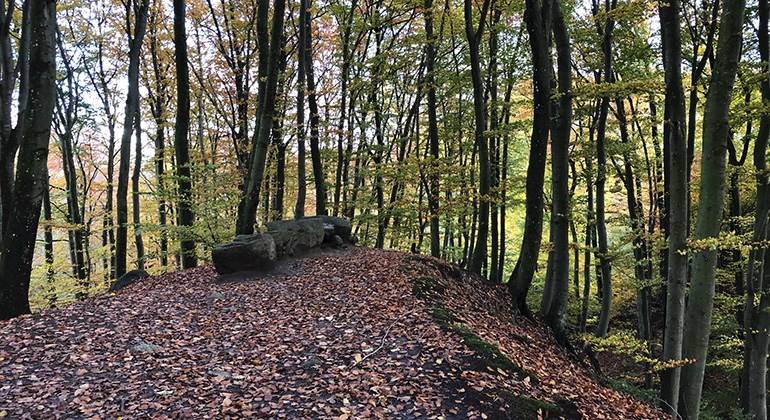 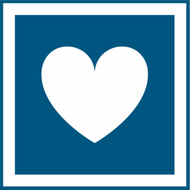 The river Bråån meanders its way through the tree-covered land at the bottom of the deep ravine. In the past, you could hear dance music and laughter from the valley floor on bright summer evenings. Today you can instead enjoy the babbling of the river and the abundant bird-song.

Rövarekulan (the Bandit's Lair) takes its name from the bandits that it is said were once rife in the valley. They would ambush travelers coming along the road and crossing the river down in the valley. Legend has it that there was a bandit's lair with iron doors deep in the ravine. The stone bridge over the river was built by Otto Ramel of Löberöd Castle in 1870.

For many years, musicians and dance bands have played music for dancing along the banks of the river. The train between Eslöv and Ystad once stopped here when there was dancing on Saturday evenings. The open-air dance-floor remained until 1975. The rune stone by the car park was found when the dance-floor was demolished. However, it was not made by Vikings, but is a relic of the 19th century's romantic interest in the ancient past. There is a memorial stone commemorating King Oscar II's visit in 1836 on the ridges.

The ravine itself was formed 14,000 years ago when the inland ice sheet melted and a glacial lake that had been dammed broke. The surging mass of water excavated the valley. Water has continued to shape the valley by creating the serpentine, meandering river that runs through the ravine. The bedrock in Rövarekulan consists of clay shale, and there are loose pieces of shale on the riverbed. There is a special, rare mollusc that lives on these, the river limpet, Ancylus fluviatilis. By the car park a wall of shale rises vertically from the base of the ravine.

In spring, the Wild Garlic, together with White Anemones and other spring flowers, creates a green carpet under the beech trees on the damp, nutrient-rich soil. In late spring the whole valley smells of Wild Garlic. Orchids such as the Early Purple Orchidand the Early Marsh Orchid bloom along the banks of the river. Just north of the bridge there is also a small mineral-rich carr, which contains unique mosses and sedges.

Rövarekulan has a diverse range of plants, lichens and fungi that is matched by few places in Sweden. Large variation in environments, the long-term, continuous presence of trees and nutrient-rich soil are factors that result in the abundance of species. A total of 400 different species of vascular plant have been recorded here.

Life in the River

The quality of the water that runs through Bråån is very high. This means that fish such as minnow and brown trout thrive here. There is also the rare thick-shelled river mussel. The White-throated Dipper is one of the winter visitors by the river. In spring the valley seethes with the song of the Blackcap, European Pied Flycatcher and Thrush Nightingale. 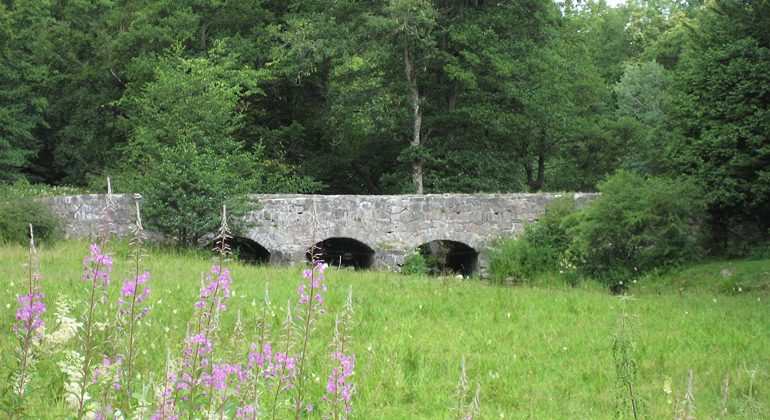