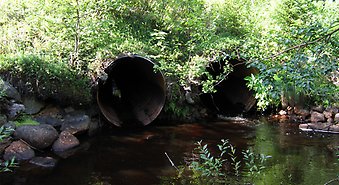 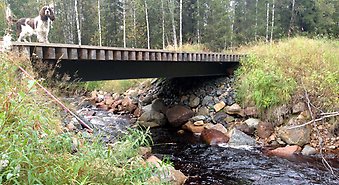 Remibar is a project with the objective to remediate culverts and dams in the counties of Norrbotten and Västerbotten that constitute migration barriers in streams.

The goal has been to create open migration routes in five river systems to benefit aquatic animals.

In Sweden, there is on average one road-river crossing at every two kilometers of a stream. On average, every third road-river crossing constitutes a migration barrier for fish migrating upstream. Another problem is dams in the streams. Many dams were built during the timber floating period. They are not in use anymore, but they are still migratory barriers for fish.

During the course of the project five drainage areas have been opened up and we have remediated 304 migration barriers. In total, 1 700 kilometers of streams have been remediated and reconnected. As a result, fish and other animals in the streams can now reach areas that were previously difficult or impossible to reach. It means that the animals are able to access a larger number of habitats for reproduction, growth, and in their search for food. In the longer term it can lead to increasing and sustainable populations in our rivers and creeks.

The project has contributed to achieve the goals in EU: s Water Framework Directive.